The Exapansion and Redevelopment Committee of the NDDC, known as the E. R. Team, held another Block Head Gathering last week. About two dozen folks showed up at The Rueb for coffee, doughnuts and discussion.

There was an update on the Downtown Revolving Loan Fund, particularly the under $10,000 category. Loans of this size require no collateral and no match. 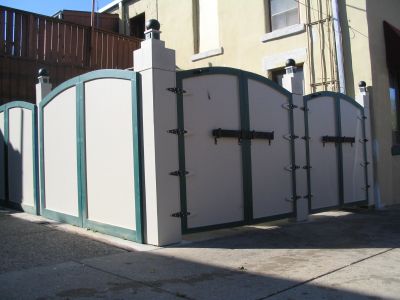 Joe Grundhoefer recently used the program to build his nifty new Rueb ‘n’ Stein garbage enclosure. Contact Deanna Kuennen at the City to find out more about this EDA program.

A “heads-up” on the Downtown Inventory was given. DSU delivered a report to the City Council and many of the NDDC Action Squad’s recommendations on downtown infrastructure were included. City staff will be conducting public forums over the next 30 days or so. The NDDC and the Chamber of Commerce will be hosting a public forum on the topic, with presentations from City staff and opportunties for public input, at the November General Membership meeting on WEDNESDAY (yes, Wednesday), November 3rd, 8 am, at the Archer House.

A discussion was conducted on the State of Business Downtown and recent events to promote foot traffic. The NDDC’s “Welcome Students” initiative and the Chamber’s “Fall Fest” were highlighted. It was mentioned that Country Living Magazine will be covering this year’s “Winter Walk”.

Speaking of nifty Garbage Enclosures, the topic of Downtown Garbage Handling was introduced. The E. R. Team has conducted several tours of Downtown Garbage Sites (19 and still counting) and has some shockingly graphic pictures. The Team’s recommendation for improving this situation is COMBINE receptacles, CONTAIN (visually) with screening, and COORDINATE pick-up schedules. The E. R. Team will be following up with owners of 3 sites to move forward on this matter.

There was then a spirited discussion of Downtown Code Enforcement, particularly Section 1306. Many downtown building and business owners have talked about the high cost of retrofitting historic structures. Deanna Kuennen suggested that the City and the NDDC jointly host a discussion between City Inspector John Brookings and interested building and business owners. The NDDC is working with the City to set up this meeting.

Finally, the recent spate of incidents of Vandalism, particularly on the Westside was raised. There was much speculation about the source of these incidents and possible ways to address them. Chief of Police Gary Smith has offered to meet with downtown building and business owners to talk about the issue. He will be invited to the next Block Head Gathering.