or “How Coffee Fueled Creativity in Downtown Northfield” 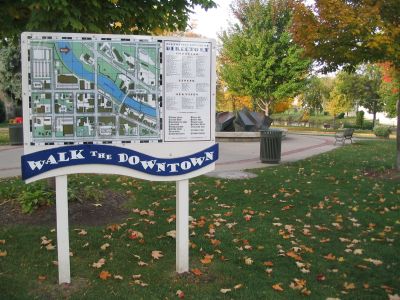 The story behind the new Wayfinding Sign in the middle of Bridge Square is an interesting one.

Dan Bergeson, Jim Bohnhoff and I were meeting about the NDDC’s Welcome First Year Students Campaign one afternoon at Blue Monday. The NDDC had decided to put maps of Downtown businesses in the boxes of the 1,200 first-year students at both colleges.

In walked Howard Merriam, Director of Parks for the City of Northfield. “Hey, cool map”, he said.

When the NDDCers told him what they were up to, Howie said, “Well, we’re done with the Crosswalk sign, I could just put your map up on the sign. After all, we’ve already got the signposts sunk in the ground”.

Thus the first of the Downtown Wayfinding Signs was “erected”. No doubt you’ve seen many a visitor, or a resident for that matter, using the sign to find their way to one of Northfield’s fine downtown establishments.

An excellent example of Private-Public Partnership…and an example of the powerful effects of good coffee on creativity.

(Editor’s note: Tiny’s is not on the sign. Stop in at Tim’s place for what many people are calling the best lunch value in downtown.)