Last Wednesday, February 9th, the NDDC hosted one of their increasingly regular (must be the bran muffins) Block Head Gatherings. As is our practice, it was held at Joe Grundhoefer’s Rueb-N-Stein at 8 am. 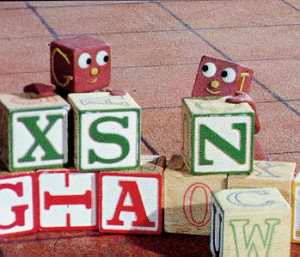 Our special guest was Heidi Hamilton, Director of Public Works for the City of Northfield. She brought Joel Walinski, the City’s new Operations Manager to the meeting.

We asked Heidi to join us in a discussion about our interest in having a “Lick and a Promise Cleaning” of downtown before the Community Day of Service on April 30th and a substantial “Spring Cleaning” before the Northfield High School and St. Olaf College Graduations on May 29th. We also voiced our interest in working with the City to get the river railings painted by citizen volunteers. Heidi listened to and clearly understood our wishes and indicated that she would see what she could do to to accomodate them.

Due, in part, to the lead article in the January issue of The City Commons (click for a PDF), many of the Block Heads wanted an update on the Downtown Improvement Plans for this summer. In fact, Katherine Domingues of Blue Monday and Tim Sellers of Tiny’s had both expressed their concerns to me before the Block Head Gathering about the impact of last year’s construction work on access to their businesses and hopes that the approach might be modified for this year’s work.

The City’s current plans for 2005 include hiring a consultant to develop a Streetscape Plan, reinstalling a drinking fountain on Bridge Square and creating a “plaza” at the southwest corner of the public library property. Later this summer, it is anticipated that new benches and planters will be added downtown. Initial estimates for the cost of this work totalled slightly over $200,000.

The Block Heads had some strong opinions about this work. Although very supportive of spending on downtown infrastructure, they had some suggestions about the prioritizations.

There was much concern about a “plaza” on a site that was probably going to undergo major modification in the near future. Heidi Hamilton and Council Members Jim Pokorney and Scott Davis, who were also in attendance, said that “plaza” might not be the best word to describe the project. They said that it would be a substantional section of the sidewalk, allowing for maximum accessibility to the crosswalks, ease of access to the new drinking fountain and sufficient space for the currently contemplated new bench and perhaps even a bike rack.

There was also a suggestion from several Block Heads that perhaps instead of getting all benches and planters this summer, we could get a few benches and planters and a few garbage cans and biker racks. Heidi, Jim and Scott said that it was certainly something that they would consider.

Finally, there were several Block Heads from “South of 5th Street”, including Randy Malecha of Willie’s Shoes, Skip DuFour of DuFour’s Cleaners, and Patty Austvold of Book Fellows. They said that they watched much of the foot traffic walk south to 5th, look down Division and then turn around and head back north. They asked if “Visible Signs of Life” could be added to downtown south of 5th Street through the Downtown Improvement Plan and that some of the very first benches, planters, garbage cans and bike racks be placed south of 5th Street.

These comments really got the conversation flowing. People stated that they thought some of the challenge for the part of downtown that is south of 5th Street is the speed of the vehicular traffic. There is no traffic control from Woodley to 5th and people get going pretty fast along this five block stretch. Several Block Heads commented on the challenge of crossing from EconoFoods to Lansing’s Hardware Store or trying to pull out of 6th Street from the west side of Division Street.

A suggestion was made and widely supported to look into the possibilitiy of adding stop signs at the intersection of Division and 7th. Heidi, Jim and Scott all said that they thought it was something that could be considered.

At Monday (February 14th) night’s Council meeting, Mayor Lansing announced that Staff is recommending that there be an Advisory Task Force set up to participate in the City’s Streetscape Plan. The NDDC will have a representative on that Task Force. The NDDC is planning to hold a special Forum to gather public input to bring to the Advisory Task Force meetings.