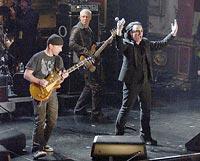 Bono and the boys

There were many mentions of Richard Florida’s book The Rise of the Creative Class at the NDDC’s March Forum. I was familiar with the book but after the Forum, I thought I’d just head over to the Public Library and check out a copy.

As I flipped through the pages, I was dismayed with the great number of charts and graphs. So I skimmed through until I found something that looked interesting to me, Chapter 16, “Building the Creative Community”.

The chapter suggests that the key to building successful businesses, and through them, achieving economic development, is to attract good people. Therefore, in addition to having a good climate for business, in order to attract top creative talent, a community needs to offer what the book refers to as lifestyle options and amenities.

Some of these amenities are familiar to us all. Low crime rates and clean streets are “no-brainers”. Some of the powerful elements of “soft” infrastructure are less obvious, but are gaining wider currency. Pedestrian-friendly town centers and increased population in downtown are increasingly recognized as contributing to a community’s economic development. Northfield is fortunate to have the former and be gaining the latter.

The book cites some examples of what it calls Creative Communities. The first one is Austin, Texas. During the 1980s and 1990s, Austin lured a number of high-tech businesses and creative people to town. When Florida interviewed the former mayor of Austin he was told that the city benefitted from the “laid-back, progressive, creative, lifestyle and music scene”. In the the former mayor’s view, it was the reason that companies and people moved from places like Silicon Valley to Austin.

The music scene did more than help attract high-tech companies, it fostered economic development built on local talent. When Willie Nelson returned home to Texas after becoming discouraged with the scene in Nashville, he played a number of local gigs, particularly at Armadillo World Headquarters, a prominent and/or notorious club in Austin. His presence, and relationships with nationally recognized artists, raised the visibility of the indigenous style of music.

Willie also recorded Spirit in Austin, an album that was a dramatic shift from Nashville-style country, pulling together local people and equipment of the highest quality for the recording process. This gathering and connecting of the human and physical infrastructure helped establish a base for increased professional opportunities for local musicians.

The steadily increasing vitality of this locally-based economic development gave birth to the Southwest Music and Media Conference, now known as SXSW. Originally conceived as an educational seminar designed to inform and instruct beginnning music professionals, the seed capital for the event came from the Austin Chamber of Commerce through the Convention and Visitors Bureau. The conference has grown from 700 registrants in 1987 to over 7,000 in 2004 and is internationally recognized as one of the premier annual events in the music industry.

Dublin, Ireland also found the “3 T” approach to be successful. The community invested heavily in its higher education system to create a work force that would appeal to technology companies. But the community realized that it wouldn’t be enough to give them the competitive advantage that they needed. Building on its deeply rooted culture of arts and music, Dubin was able to foster a bohemian scene that caught the attention of creative people from a variety of backgrounds and countries. In order to build a high-quality place to live, the city restored its historic Temple Bar district, bringing back the gathering spots of some of the greatest writers in western literature. Their efforts not only retained native musicians like U2 and Van Morrison, it convinced Andrew Lloyd Webber and Ron Wood to relocate to Dublin. Think of what those two could contribute to our local economy.

The final example that is cited is used to demonstrate how all 3 of the “T”s must be in place to attract creative people. Pittsburgh has technology in the form of the highly respected Carnegie-Mellon University. The people that are attracted to that school are indeed talented. Apparently the “T” that needs work in Pittsburgh is tolerance. Arts activities, at least those initiated by the younger generation, have had a difficult time finding support in the community. Many of the young talents, such as Deiselboy and Christina Aguilera, have left the city.

Now on to the 1934 Auditorium. From these three case studies, a key ingredient for successful economic development appears to be a “scene”, featuring tolerance, a good mix of food and beverages, and plenty of local music.

The music scene in Northfield is ready to move to the next level. A number of our emerging and mid-career musicians export their talents to other communities and import the money back home. If we were able to build on this process, Northfield would experience additional economic develoment.

The 1934 building, reused as a community center for performing arts, could provide low-cost rehearsal space, storage space, office space and even modest performance space for Northfield’s music community. Not only would such a facility help take our musicians to the next level of professionalism, the local economic spin-offs would include music pulsating through the streets of downtown, where the sidewalks would be energized by pedestrians walking from dinner, to shopping, and, ultimately, to the show.

Perhaps I’ve read too much into these case studies. Perhaps I’m dreaming too big again. But it sure was fun to use U2’s, Willie’s and Christina’s names in the title and their pictures in the blog.