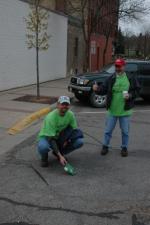 During the 2005 Community Day of Service, NDDC President Dan Bergeson and Executive Director Ross Currier spent the morning picking up trash in downtown.

They were pleasantly surprised to find downtown to be fairly clean…at least of trash on the sidewalks.

Unfortunately, there were some shocking discoveries made that morning…

…BUTTS, hundreds, if not thousands of them, cigarette BUTTS, mostly in the grates and rocks around the trees.

Dan and Ross made a valiant attempt to pick them up…BUT, it soon became apparent that it was too big a job for that method.

Fortunately, at that very moment of their growing despair, Arnie Nelson appeared…

…Arnie went down to Lansing’s Hardware Store and rented an industrial vacuum cleaner to pick up the BUTTS.

It raises a couple of interesting points. First, it would be great if smokers would not throw their BUTTS on the ground…(of course, there would need to be some BUTT buckets for their disposal)…and, Second, would it be worthwhile to have a regular, systematic clean-up of such offensive bits downtown?

It wouldn’t be free, Arnie footed the bill this time, BUT perhaps if the cost were cooperatively addressed it would be both affordable and well worth it for downtown folks.