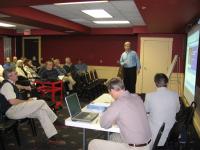 At the NDDC Downtown Forum this morning, our panelists highlighted the risks and opportunities that the United States is currently facing.

We are no longer one of the world’s most developed countries. China, India, Korea and Romania are far more advanced than we are in emerging communication technologies.

Fortunately, for as little as $50,000, downtown Northfield could be a global economic player.

Dave Pokorney, Chaska, Minnesota City Administrator, started things off. His city’s goal was to offer internet access for less than $20 per month. Any one of Chaska’s citizens can now sell their product to the world from their home based business for $15.99 per month.

Dave pointed out an additional benefit from the city providing this low-cost service to its citizens: when folks log on, they go to a home page that announces what’s happening in Chaska.

Stuart DeVaan, of implex.net, was next. In a summary overview that had techies drooling and the rest of the audience sporting glazed eyes, he spoke of 802.11, web-meshing and point-to-point connections. He summarized by saying that we should focus on getting maximum leverage from our infrastructure.

Jane Leonard, of Minnesota Rural Partners, took this concept to the next level. She told us to forget the technological details and to focus on what the community could do with the technology. She urged the audience to let go of their fear of the constantly changing technology and to make the commitment to participating in the rapidly emerging economy.

Bob Courchaine, a Northfield-based software supplier to the global economy, said that leveraging cheap networks to the world wide web is the key to competing in the new economy. He suggested that getting all of Northfield on the internet should be the goal. He cited his own organization as an example of pursuing low-cost internet access to do business world-wide.

After the meeting, Jim Pokorney, City Council Member, came up to me and said, “For $50,000, all of downtown could have low-cost internet access”. A few minutes later, Keith Covey, NDDC Board Member, came by my office and said, “The NDDC should make this issue a priority”. Looks like we’ve got the team in place.