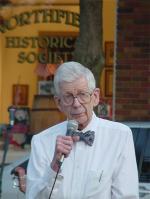 Last week I reported that the Northfield Downtown Development Corporation had received recognition as the Official Downtown Organization through City Council approval of EDA funding for the NDDC.

Well, to help me keep it all in perspective, the other day I got a Letter from Bob Jacobsen. As I said before, the heck with the council, we got a letter from Bob.

If Bob Jacobsen is bringing a downtown issue to the NDDC, then, indeed, we are truly the downtown organization.

Bob was calling our attention to something that the NDDC Retail Cabal had recently discussed. Apparently, for some time, Northfield Transit Service will bring college students from the two campuses to points south on Highway 3…but NOT DOWNTOWN.

At the Retail Cabal, we learned that service was cut to downtown a few years ago to reduce costs. Those in attendance thought that it should be as convenient for students to shop downtown as out on south Highway 3.

Bob closed his letter with a handwritten note, “Ross, I thought the NDDC should be miffed”. Bob, we are…and we’re following up as I write.

At 5:15 pm today, I got a call from Deb Little, Transit Manager for the City of Northfield. She said that the hourly route from the colleges to points south on Highway 3 (mentioned in The City Commons) can be used by the students to get to downtown. She said all the students have to do is to ask to be dropped off in downtown. She said that she will make this clearer in future publications.