Alexander McDonald Keith, also known as A. M. “Sandy” Keith, will be the speaker at the NDDC’s September Forum, on Tuesday, September 6th, 8 am at the Northfield Arts Guild. As usual, cookies and coffee will be served. See this PDF of the press release for this event that will be sent out to the media.

Sandy, currently the Executive Director of the Rochester Downtown Alliance, will be focusing on Rochester’s efforts to increase the vitality of their downtown through a Business Improvement District, or Special Service District.

Before rising to his current illustrious position, Sandy was Chief Justice of the Minnesota Supreme Court, Lieutenant Governor of Minnesota, Minnesota State Senator from the 4th District, an attorney and a member of the U. S. Marines.

See page 7 of the Rochester Chamber of Commerce’s June 2005 newsletter, Chamber Advantage for a piece written by Keith on the new organization, the Rochester Downtown Alliance (RDA).

Here’s the text of the article, along with a photo of Keith from his days in the legislature. 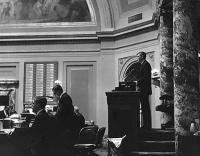 On February 17, 2005 the Rochester Downtown Alliance (RDA) held its first meeting which led to the creation of this nonprofit corporation on February 23, 2005. This new corporation is composed of a broad range of people representing property owners, business leaders, City government, and nonprofits all with a direct stake in enhancing business and economic development conditions for downtown Rochester.

The corporation grew out of a two year long study conducted by the City’s Downtown Planning Task Force. This task force recognized that our downtown is the economic and cultural center of our city. It is the home of the Mayo Clinic, the center for both City and County Government, and the home of the Civic Center,Art Center and Civic Theater; venues that house most business conventions, cultural and sporting events for our city and region.

The study pointed out that we have a huge captive market of visitors and employees in downtown Rochester. It also is the home of many locally owned and operated businesses. The study further showed that there were many that felt that the overall environment of our downtown was bland and unappealing. It pointed out that the skyway and tunnel system can be confusing. It further pointed out that there is no central gathering place or visible connection between the Mayo Clinic and the Civic Center.

The RDA would use this funding to; support the organization of the administration and advocacy of the new district, provide destination marketing, assist with economic development and housing marketing,and increase special events and festivals and the marketing of the arts community.

This new corporation will be housed in the Chamber offices and will work closely with RAEDI and your Chamber and the Convention and Visitors Bureau to assist in the revitalization of downtown. Our downtown is blessed by a strong employment base, attractive natural assets, and a core group of successful, unique retailers and restaurants. We believe this new institution and its operating plan will set the stage for renewed revitalization of downtown Rochester.