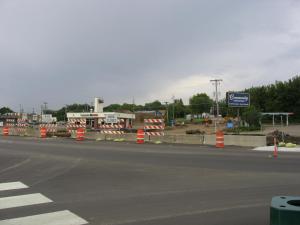 At the 9/22/05 Economic Development Authority (EDA) Meeting, City Staff announced that the public input on the Q Block (so named because of the Quaterback Club and Quizno’s on the site) redevelopment project would occur after the Consultants and City Staff have defined the realm of possibilities as two options. The public would then be allowed to choose between the two options.

Also of interest at the EDA meeting was City Staff’s comments about Safe Crossing of Highway 3 at West 3rd Street. EDA President Paul Smith raised the point that for years he has been hearing citizen concerns about creating a safer crossing of Highway 3. City Staff acknowledged this concern but said that they didn’t want to raise citizen expectations. Staff offered “traffic-calming” measures like landscaping as an alternative to traffic signals.

The new five lane highway that is being constructed in the middle of our community is at least 100 feet across from curb to curb. If you’re in the middle of the street trying to pick your moment to run to the far curb, trees planted 50 feet away will have a limited effect on your safe crossing, at least in my opinion…but then, I’m not a traffic engineer.

Rather than defining the development of the Q Block by one of its two shortest sides, a broader vision would be to connect the westside and eastside of our community while simultaneously increasing pedestrian safety in crossing the highway. It is a a vision that the NDDC has been advocating for since our start in 2000.

The public infrastructure required for development of the Q Block will be public expenditures. The public infrastructure will also largely determine the safety of crossing the highway. We hope that the citizens that support the vision of connecting our community will have more of an opportunity to express their opinions than choosing between predefined concept A and predefined concept B.