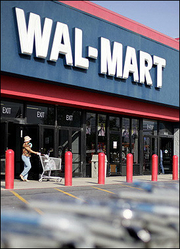 Northfield Issues email discussion list a rumor from a well-placed source that Walmart was considering opening a store in Northfield. Respondents have hypothesized on the impact that such a development would have on downtown. The opinions that I received could be summarized as belonging to two camps. The first was that Walmart was a huge threat and should be resisted vigorously by individuals and organizations such as the NDDC. The second was that downtown has shown it could survive big box threats and that there were better uses of NDDC resources.

In today’s (9/12/05) Star Tribune, there was an article about Walmart expansion and efforts at reisistance. I found it interesting that the discussion had moved beyond the “promotes economic development vs. destroys main street” and “creates jobs in the U. S. vs. moves jobs to China” arguments to the “saves us money vs. costs us money” argument.

Walmart suggests that they save consumers $50 to $60 per month in household expenses. For most people in our country, that is a significant sum. Opponents of Walmart say the corporation costs states millions of dollars per year in food stamps and subsidized health insurance for Walmart’s employees. The State of Wisconsin recently calculated that it cost them $2.7 million per year in BadgerCare health insurance.

The article listed websites for more information. They are: www.walmartwatch.com, www.wakeupwalmart.com, and www.walmartfacts.com. If Walmart is indeed considering Northfield, it would be important for those who feel that Walmart “costs us money” to start gathering information and stating opinions now.