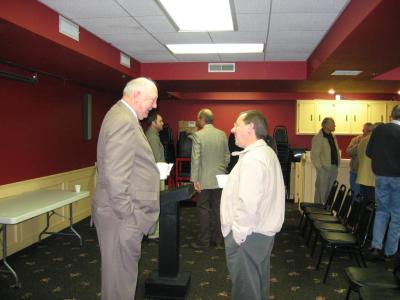 NDDC Vice President Joe Grundhoefer, of J. Grundy’s Rueb-N-Stein, speaks with Bill Bassett, Interim City Administrator, after this morning’s Downtown Forum. Could they be discussing Stop Signs at 7th Street, the Repeal of Section 1306 or the Expansion of Sidewalk Dining?

Bill Bassett delighted the audience at the NDDC’s November Forum. The guy can cynically joust with Dixon Bond in critiquing potential mechanisms of regional cooperation and then in the next breath cheerfully go toe-to-toe with Kiffi Summa on the comparative philosophies of policy discussions at the council level. Wow…

He refreshingly opened his comments with the statement that “a little skepticism about all things governmental is probably good”. He went on to say that there is a natural tension between elected officials who advocate for the wishes of the citizens and the bureaucrats (his word, not mine) that are focused on limiting the use of resources. He views his role as working to accomplish the council’s goals while respecting the availability of resources.

Bill praised organizations like the NDDC which he said “enrich life in the community”. He cited the long history of volunteerism in America and the important contributions which it has made to our country. He said that in his 40 something years in public service, he had learned that “you can’t replicate the genius of the citizens”.