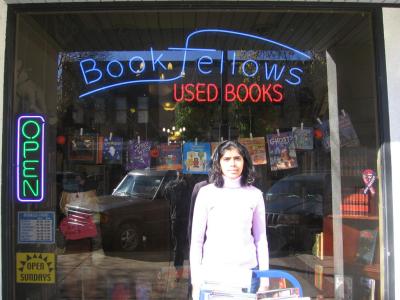 Prashanti Austvold has a guest column in Saturday’s Northfield News (10/8/05) that anyone who is interested in the economic vitality of Downtown, or Northfield in general, should read.

I met Shanti at the most recent Block Head Gathering and then talked with her more as I tried to track down used copies of books for my oldest daughter’s literature class at the High School. You see, Shanti recently started working at her Mother-In-Law’s bookstore, Bookfellows.

Shanti used to be a commuter. She married a Northfielder (good move) but worked in The Cities. As she says in her column, “My only contact with the downtown was the rare evening I got to spend with my husband’s few leftover friends still in town. As the days grew warmer, I got to explore around the town a little bit but often passed by the downtown on my way to Cub Foods or Target. Working in The Cities, I could rarely make it to downtown during hours I could enjoy the gifts the town has to offer. I felt like the downtown was always closed when I was home…”

She goes on to talk about discovering all that the downtown and the community has to offer. “I did not know that there was more in the town than the two colleges. Knowledge of this town had been a mystery to me since any news of it did not come across me by chance. I did not have a reason to seek it out. I never saw it advertised, or events published to come to, when I was in the Twin Cities area and Northfield is so close… The town is a pretty “well-kept secret” as I have heard visitors to our store say who have come upon it by chance”.

For those of us interested in economic vitality, we should listen to Shanti. We need to work harder to make the downtown known and available to new residents. We also need to let folks throughout the region know about this “well-kept” secret. Apparently we’re sitting on a gold mine, we just need to get the word out so that we can get a little help from new residents and regional visitors getting it into the bank.