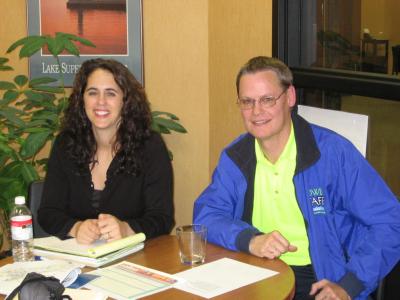 This why I really went to Duluth, to meet with these folks.

Duluth’s Greater Downtown Council was formed in 1985 by downtown business and property owners to promote downtown and advocate for the district. Two years ago, they decided to create a Special Services District to more directly influence their downtown.

Although promotion and advocacy continue to be important for the Downtown Council, with one full-time and two part-time employees, the Clean and Safe Team has become a significant part of the organization’s activities, with six to nine full and part-time employees, varying with the seasonal needs.

The top priority of the Clean and Safe Team is serve as “ambassadors” for downtown, answering questions, giving directions and providing escorts. The second priority is to pick up trash, pull weeds, and remove graffiti. The third priority is to reduce illegal behavior. The Team members have walkie-talkies that go right to the police. Offenders can either move on at the Team member’s request or get arrested by the quickly responding police.

The Clean and Safe Team patrols the Downtown District from 8 am to 12 pm. They wear neon green T-shirts under blue jackets featuring the Team logo. Building and business owners that I interviewed universally said, “They’re everywhere”.

I started to ask this member of the Clean and Safe Team about his work. Then he got a call and he said, “I need to respond to this one”. The program works. 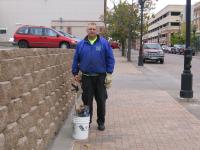 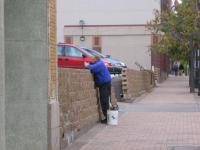