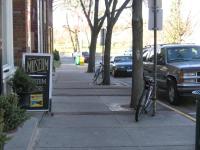 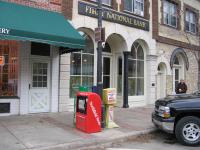 The City Staff and Consultants announced their recommendations for the 2006 Downtown Improvement Projects yesterday. The list contains the Library Plaza, Decorative Fencing for Parking Lots, Arches at the Entrances to the River, Wayfinding Signage and more Benches and Planters. Notably absent are the Bike Racks and Newpaper Corrals.

In our opinion, all of the things on the list are fine. Some of them are even great. However, the total cost the list of recommendations will probably be over $200,000; it’s already at $164,000 and an estimate for the Decorative Fencing has not yet been obtained. The Bike Racks and Newspaper Corrals together, including installation, would be under $10,000.

The NDDC has been advocating for Bike Racks and Newspaper Corrals since 2003. Although there are certainly some downtown building and business owners that are no doubt enthusiastic about a number of the items on the list of recommendations, nothing gets mentioned to me more often in person, by phone or through e-mail than the bikes being chained to signs or trees and the unsightly huddle of newspaper boxes in front of business entrances.

We’re talking about spending less than 5% of one year’s Downtown Improvement Project budget on the two items that are most often requested. Don’t make us launch a “5% for Bike Racks” campaign, we’ve got better things to do with our time. Please, just install them.