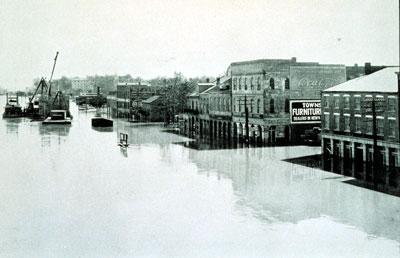 I am currently reading John Barry’s Rising Tide. It’s about the Mississippi River flood of 1927.

In trying to explain how people could have missed an impending disaster of such magnitude, the author suggests that it may have been part of that society’s reluctance to come to grips with the emerging reality. He says, “perhaps at no other time in American history, even including the 1960s, did so wide a gap develop between a mainstream culture that clung to its certainties and American intellectuals”. Sinclair Lewis mocked Babbit while the Chamber of Commerce editorialized: “Dare to be Babbit!” U. S. inventors and entrepreneurs showed almost a frenzy of creativity during a period in which an article in American Magazine entitled “Why I Never Hire Brilliant Men” explained, “Business and life are built upon successful mediocrity”.

This denial of reality and preference for bland boosterism might not have been a problem (ignoring the rise of the Klan, the increasing number of lynchings and the violent suppression of organized labor that seemed to accompany this desire for normalcy, sameness and the average), if life had indeed been a quiet pond instead of a raging river. However, when those people who started warning of unusually heavy rainfalls and historic heights of water levels in the summer and fall of 1926 were dismissed as unprofessional or attacked as alarmists, these views set up the worst natural disaster up to that point in American history.

The public denials started with the government staff. The army engineers and levee board scientists proclaimed their confidence in the effectiveness of existing systems, ignoring years of expressed concerns by members of the private sector. They were not alone, however. “Publicly, every person in authority…proclaimed absolute confidence. So did the newspapers.” There seemed to almost be a conspiracy between the bureaucrats, the elected officials and the newspaper publishers and editors to deny any concerns or silence any critics.

While they made their public claims, time passed and the waters rose. Opportunities to protect people and property slipped away.

Then the Mississippi River broke out of its levee system in 145 places and flooded 27,000 square miles or about 16,000,000 acres at depths up to 30 feet. The flood caused over $400 million in damages, left 700,000 people homeless and killed approximately 250 white people in seven states. The number of black people killed will never be known, the official leadership didn’t keep count. Most historians believe that the number far exceeded that of the whites.

It was considered the worst flooding disaster in United States history until Hurricane Katrina.

I have enough trouble understanding why a society would proudly praise mediocrity or celebrate an incomplete project. I really can’t understand why people would continue to pour time and money into projects and processes that were increasingly coming under criticism and already showing signs of failure.

But then again, I can’t even understand why you’d say a lemon is a pineapple.