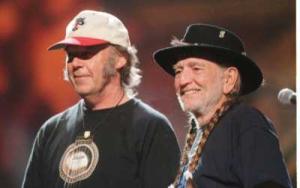 In a recent interview* about his new album Prairie Wind, Neil Young talked about his long-term relationship with the environment.

My grandfather was from South Carolina, and he moved up to Canada. He used to go duck hunting with my mom and dad, and then he’d come back and my mom would cook the ducks and make them with the wild grains, with the wild rice. And we’d have roast duck with wild rice.

And there were a lot of pictues of my dad in Sports Illustrated magazine with my grandpa. They did articles on duck hunting in Northern Manitoba. And it really was like, you know, they go out there hunting for the birds and if you went at the right time, you actually couldn’t see the sun, there were so many birds in the sky.

That’s how many birds there used to be. Now, where are they? What’s going on? You know, there’s too many signs. Our leaders need to realize that there are big signs. They need to take a look around the planet and see what we’re doing to the planet and what’s going on.

I know there’s a lot of people just shaking their heads, because I might sound like a tree-hugger or something. You can put a label on a person like me, and dismiss it. It’s an easy thing to do. A lot of people are taking the easy route. But there’s a price to pay for that.

All you have to do is remember what your grandparents said and what they talked about and look around and see what we’ve got now and wonder, you know, what are you going to tell your kids? And what are their kids going to remember from what you said when you’re their grand-daddy? What have you got left? What are they going to have left? I mean, we really have to be careful here.

I’m trying to do the best I can to eliminate that, in my own way. And guys like Willie are trying to do it. We’re just doing what we do. But the politicians in this country, I mean, especially this group we’ve got now – I know that a lot of them are decent people and everything, but they just don’t see it. They don’t appear to understand that there’s a balance of nature that needs to be maintained.

Things like destroying the Alaskan Wildlife Refuge, which, to dig these holes and take this blood out of the earth, this old dead stuff – if we only use what’s in Alaska and we didn’t use anything else, it would only last us six months. So that’s really a shortsighted thing, to do that.