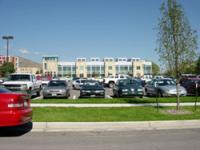 In less than a week, two sudden changes in plans have undermined years of community process. Of even greater concern, these design changes signal a break with one hundred and fifty years of architectural tradition in Northfield.

The first change came at last Thursday night’s Public Input Session on the Q Block. It was announced that it wasn’t economically feasible to build a two story building on what is the southwest corner of the Highway 3 and 2nd Street intersection (site of the former Quizno’s). I believe that this economic analysis is based solely on the parking requirements determined by suburban-style commercial development.

Ironically, when the NDDC was in the early stages of advocating for a traffic light at the intersection of Highway 3 and 3rd Street (where the Quarterback Club greets State Farm Insurance), we were told that the two story development envisioned for the northwest corner of the Q Block (site of the former Quizno’s) would produce traffic calming that would make the traffic light at 3rd Street unnecessary. Lucky for us, we appreciate irony.

The second change came at this Tuesday night’s Planning Commission meeting. The commercial component for The Crossing development has been substantially reduced and the two story building at what is the northeast corner of Highway 3 and 2nd Street (site of the former Schultze’s bike shop) will now be a one story building. The developer said that the changes were soley driven by parking requirements, “The commercial was sized to fit the parking”.

For years, at least back to the September 25-27 1998 City of Northfield/EDA Design Charette, many people envisioned that the design component of this important intersection would reflect that of two city streets intersecting through the construction of two story buildings rather than allowing the state highway (in our vision, to be renamed John North Boulevard) to determine the design. In less than a week, these years of effort have been wiped away.

Perhaps there’s still a chance to preserve the community’s historic vision…if only people speak up.