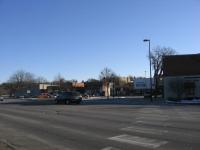 At the January 9th, 2006 Meeting, the Council voted to pursue a traffic light at 3rd Street and Highway, the intersection bordered by the Quarterback Club and State Farm Insurance. The memo on the item is below:

ITEM: Consider passage of a resolution asking the Minnesota Department of Transportation to install a traffic signal at the intersection of Trunk Highway 3 and 3rd Street

SUMMARY AND ACTION REQUESTED:
Members of the City Council and many citizens of Northfield believe that a traffic signal should be installed at Trunk Highway 3 (TH3) and 3rd Street in order to improve the ability for pedestrians to safely cross TH3 in this location and to improve the connectivity of downtown to the west side of TH3. In response to an offer by State Representative Ray Cox to work with the Minnesota Department of Transportation (MnDOT) on this issue if the City Council passes a resolution requesting the signal, Council Member Bond requested that a resolution be brought forth for the City Council consideration.

There is a long history of requests from the City to MnDOT for a traffic signal at 3rd Street. The Minnesota Department of Transportation has consistently denied this request because the intersection does not meet necessary traffic signal warrants. The most recent request for a signal was sent to MnDOT in March 2005. MnDOT responded that traffic counts will be completed at 3rd Street in the summer of 2007, after TH3 construction is complete, to compare traffic volumes to signal warrants. Staff supports MnDOTs plan.

The resolution passed unanimously. Members of the Northfield community have been working toward this goal for at least ten years. The NDDC has aided these efforts since its very beginnings in 2000. We would like to offer our sincerest thanks to the Council for taking this important and visionary step, as well as Staff for sensitively word-smithing the resolution.

The actual resolution is contained in the extended entry:

A RESOLUTION BY THE MAYOR AND CITY COUNCIL OF THE CITY OF NORTHFIELD, MINNESOTA REQUESTING INSTALLATION OF TRAFFIC SIGNAL AT THE INTERSECTION OF TRUNK HIGHWAY 3 AND 3RD STREET BY MINNESOTA DEPARTMENT OF TRANSPORTATION

WHEREAS, The City of Northfield is grateful to the Minnesota Department of Transportation for the significant investment being made to improve Trunk Highway 3 through Northfield and the accommodations that have been made to accommodate community concerns; and

WHEREAS, The intersection of 3rd Street and Trunk Highway 3 is a key entrance to downtown Northfield; and

WHEREAS, 3rd Street is a preferred point for pedestrians to cross Trunk Highway 3; and

WHEREAS, The City of Northfield believes that traffic signal warrants are not adequate to judge the social and economic value of a signal at this location.

NOW, THEREFORE, BE IT RESOLVED BY THE MAYOR AND CITY COUNCIL THAT: The City of Northfield hereby requests, again, that MnDOT install a traffic signal at 3rd Street on Trunk Highway 3.

BE IT FURTHER RESOLVED BY THE MAYOR AND CITY COUNCIL THAT:
The Council requests the support and assistance of our State elected officials in obtaining a signal at this location as soon as possible.

PASSED by the City Council of the City of Northfield on this 9th day of January 2006.