At the NDDC’s monthly forum this morning, Lee Lansing looked back on his first year as mayor. He pointed to private-public partnerships as among the Council’s greatest accomplishments in 2005, including the Village on the Cannon, Millstream Commons, The Crossings, Everybody’s Playground, the Senior Center lease, work on a new Business Park, joint efforts with both Carleton and St. Olaf, upcoming Streetscape Projects, the Veteran’s Memorial and the Sesquicentennial Celebration. He praised the work of Council and Staff to make these things happen. Council Member Kris Vohs added that the HRA had completed an exciting private-public project too.

He talked about lessons learned, including the challenge of getting items on the agenda, the high percentage of time that goes to “just keeping the door open and the lights on”, and the sometimes frustrating efforts to obtain needed information or clear and timely financial reporting. Council Member Dixon Bond added (in my vote for the quotation of the day), “If you don’t have the attitude, the system doesn’t matter”.

Lee also suggested ways that we might enjoy more successful private-public partnerships in the future. He said that the Council must model the way with more consistency in their process. He hopes that the Council will be more proactive about getting things on the agenda and that the Work Sessions might be more effectively used to develop Work Plans. He believes that all the members of the Council have shared and inspired visions to protect our high standard of living and hopes that they will challenge the process to get the work done. He wants the Council and the Staff to be empowered to accomplish shared goals and be guided by spirit of the community. Council Member Scott Davis emphasized how important that community input was to all the Council Members.

As for specific work to be completed in 2006, Lee cited a decision on the Swimming Pool, 7th Street Parking, the hiring of a new City Administrator and Finance Director, that The Crossings will be built and substantial Streetscape Projects will be completed. He also mentioned that rising real estate taxes were beginning to threaten downtown businesses’ vitality and that the Council would be looking at possible means of addressing this important issue.

NDDC Community Advisor Jane McWilliams added that the Cultural Inventory and Action Steps will be completed in ’06 and thanked the Council for all their support for this effort. The Mayor pointed out that the results of this Cultural Work Plan would provide community guidance for future city projects.

At the end of the meeting, Mayor Lansing was given an NDDC Volunteer t-shirt, so that in the future he could be as nattily attired as Dundas Mayor Switzer. It was pointed out to Lee that he would now be joining the downtown cigarette butt clean-up crew of Dan Bergeson, Ross Currier and Arnie Nelson. 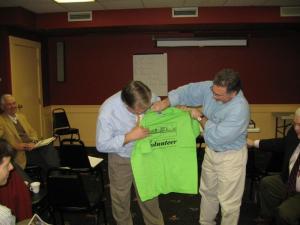