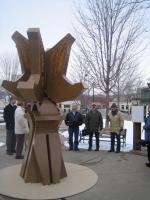 …as least temporarily, so folks could get a sense of how it might fit into downtown.

About two dozen people, including a number of elected and appointed officials, braved the nipping and eager air in Bridge Square Thursday afternoon to see Ray “Jake” Jacobson’s model of his proposed sculpture “Harvest”. Jake’s comments about the conception of the project and possible locations generated enthusiastic responses from the gathering.

Now Jake, and his supporters, will have their work cut out for them as they go about generating financial support for the sculpture. Go, Jake, go.