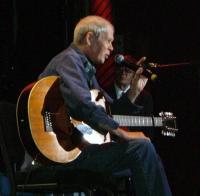 Check out the City Pages…

from his autobiography, Chronicles:

“With my newly learned repertoire, I then went further up the street and dropped into the Ten O’Clock Scholar, a Beat coffeehouse. I was looking for players with kindred spirits. The first guy I met in Minneapolis like me was sitting around in there. It was John Koerner and he also had an accoustic guitar with him. Koerner was tall and thin with a look of perpetual amusement on his face. We hit it off right away. … When he spoke he was soft spoken, but when he sang he became a field holler shouter. Koerner was an exciting singer, and we began playing a lot together.”