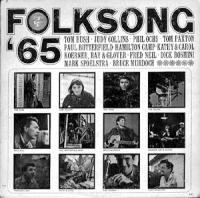 Melinda Russell, a professor at Carleton, called me about the Spider John Koerner show (Thursday, February 23rd, 8 to 10 pm, at the Grand). She wondered if there was going to be a special student rate. I told her, yes, admission is $6, with students paying only $4. She was pleased, because her whole class is coming. You see, Melinda is teaching a class called “The U. S. Folk Music Revival” and Spider John plays a big role in this history. Here are some of her comments:

Now that I’m teaching a new course about the Folk Revival, I’m becoming more aware of the scholarship. One of the most important undercurrents in the scholarship is that of regionalism. While the revival was a national phenomenon, with magazines and t.v. shows and cross-country tours, etc., it was also an extremely regional one, with hot spots across the country, like Cambridge, Greenwich Village, Chicago, Berkeley, Madison, and, of course, the Twin Cities. Spider John Koerner helped to start and shape the folk revival as it occurred in the cities, starting in the late 1950s. In his solo work, his work with Ray and Glover, and others, he has brought his unique talents to an unusually broad repertoire. Spider John’s work has always sounded like no one else’s, and even playing traditional repertoire, he has always brought to it his singular style, earning him an ardent and still-growing group of followers. It’s a luxury to have him pop right down to Northfield for our convenience, and I’m sure it will be a memorable night.

Well Melinda, I couldn’t agree with you more. Spider has unique talents, a singular style, and a still-growing group of followers. The NDDC thought that it was a relatively affordable luxury to have him here in Northfield and we sure do hope that it’s a memorable (in a positive way) night for everyone.