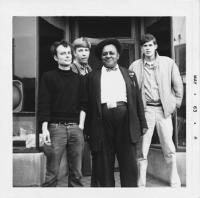 Several people have asked about the Folk Revival that I mentioned in my blog on Monday. I’m really not an expert but I’m willing to share my very basic understanding of it with you.

The great Folk Revival of the 1960s really begins in the late 1940s or early 1950s. Most historians tie it to 1958 and the Kingston Trio’s #1 hit, “Tom Dooley”, a catchy little tune allegedly written by a returning Confederate soldier sentenced to death for killing his girlfriend. Many of these historians view the revival as a reaction to the bland homogeneity of the mass culture that arose after the Second World War. The seemingly innocuous return to acoustic instruments and themes of everyday life were often implicitly political with their underlying message of the power of the common working people during a period which saw the rise of what President Eisenhower called the military-industrial complex, not unlike the earlier vital periods of folk music in the United States during the periods of urbanization in the 1890s and economic expansion in the 1920s.

In the 1950s and 1960s, a number of traditional music enthusiasts/musicians started a renaissance of Appalachian folk (thought to contain the most unadulterated imports from the British Isles) and blues (considered by many to be essentially African-American folk) music in America. Inspired by the rare records they were able to obtain from the pre-war period (particularly the work of Harry Smith for his Anthology of American Folk Music) they searched out the surviving musicians for performances at folk festivals and revived the music themselves for contemporary audiences, in the process dramatically shaping the development of music on both sides of the Atlantic. This is how Spider John Koerner influenced Bob Dylan and John Lennon.

Perhaps things occur in 30 or 40 year cycles. The movie “O Brother, Where Art Thou?” once again revived European-American and African-American folk music. The soundtrack featured long-time folk musicians like John Hartford and Ralph Stanley as well as emerging artists like Allison Krauss and Gillian Welch playing a number of traditional songs as well as some songs composed by great American artists from early in the last century like A. P. Carter, Nehemiah “Skip” James, “Mother” Maybelle Carter and Jimmie Rodgers.

But, hey, why settle for anything less than the real deal, come see Spider John at The Grand, this Thursday night from 8 to 10 pm. Doors open at 7:30 pm.