No surprise, perhaps, that anyone who chose to attend an NDDC-sponsored forum about the future of the downtown library would be interested in keeping the library right where it is — in the heart of downtown. Still, many of us “downtown stakeholders” were pleased to see the turnout at the February NDDC Downtown Forum and to hear and *feel* the passion in the room. No doubt about it, the 42 people in attendance said: The Northfield Public Library is an invaluable asset to our downtown, and we need to work together to ensure that it continues to thrive in a location that offers limited (and expensive) options for expansion. 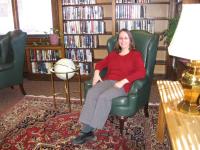 Library Director Lynne Young (seated in the biography section, after “weeding” the shelves) has hired an outside consulting firm to help assess the library’s assets, its perceived weaknesses, the possibilities and drawbacks of the current building, and what amenities might be added in a new or expanded library. Lynne and her team have been conducting focus groups around town, and she was gracious enough to accept the NDDC’s offer to use our monthly forum as a focus group session.

Here’s what we told her and consultant Jan Feye-Stukas, in response to six questions they asked:

Major issues facing Northfield and how they might affect the library:
* The library is a “major magnet” that brings people downtown. It currently serves a population base of 29,929 and soon will need to serve 38,500, Feye-Stukas said. But can the library, in its current location, continue to serve the needs of our growing population?
* One audience member cited the “two hearts” of Northfield: the downtown and the growing south end. Given the expanding residential and retail areas to the south, do we need a library extension out by the public schools? Feye-Stukas replied that the conventional wisdom of library planning calls for a population base of 50,000 before a library expands beyond a main branch.
* As we think about “growth,” can we talk about it in terms of “sustainable growth,” asked ReNEW Northfield Executive Director Bruce Anderson.
* “People look at the library more and more as a gathering space,” said Feye-Stukas, the consultant. “The current building doesn’t meet that need.” Bob Will responded that “community” is not defined by geography alone. “There is a soul to a community,” he said, “and we need to keep that.”

Weaknesses of the current library building:
* Parking is hard to find in the back, and the stairs off Division Street are long and steep for seniors, parents with baby strollers or anyone with a physical disability.
* “The presence on Division Street is forbidding,” said NDDC Board Chair Dan Bergeson.
* The current design “wastes space,” and LeAnn Noble, who co-owns the property to the north on the library block. Noble, who argued for library proponents to consider expanding in a different direction, noted that takeover of her property would add only 6,000 square feet to an expanded library.
* The current library has too little meeting space, period — and too little for teens and pre-teens.

Strengths of the current library building
* It fits into the community architecturally. It has a history that is worth preserving. It is a visually attractive building, both inside and out.
* Again, it is a magnet (that word came up often). People come to the library and then continue to spend time (and money) downtown.
* Several people noted the friendliness of the staff and cited the library’s programs that reach out to seniors, to young children and to the Latino members of our community.
* The library provides computer access to people who otherwise might not have it.
* The website is helpful and user-friendly.
* The large-print collection is essential and much appreciated.
* Wireless Internet access is a big plus.

What might be offered in a new or expanded facility:
* The NDDC should sponsor a resources collection for entrepreneurs and small-business owners.
* The library needs more research space (“a place to spread out papers”) and more meeting space, both an additional large room that has video capability and several more modest-size rooms.
* Anderson and others spoke up for an in-house coffeeshop.

If expansion occurs, what should be preserved from the current building:
* Preserve some of the landscaping when or if the library does expand.
* Consider closing off Third Street to vehicles. Expand the library to the south, and use Third Street for foot traffic. Consider expanding *over* Third Street, with green space and underground parking. (“It’s always cheaper to build new than to try to remodel,” Feye-Stukas said.)
* Preserve two separate entrances on two separate levels.
* Several people spoke up for pedestrians and urged participants not to think only about parking problems. “Make Northfield as interesting a town to walk in as possible,” one participant said.
* Though cost could be prohibitive, said banker Rick Estenson, consider expanding down — that is, could the library expand into an enhanced basement.

What needs to happen to move a library expansion forward:
* “Let’s not do the architect’s job,” said one participant. “Instead, let’s prioritize what amenities matter to us” and let the architect do his or her job from there.
* “The library must stay where it is downtown.”
* Information is the key commodity to move this issue forward. Share what you know!
* Could we use corporate dollars to fund an expansion? No, not a “Target Public Library,” per se, but how about asking Malt-o-Meal and College City Beverage and other major employers to sponsor named rooms within an expanded library, said retailer Eleanor Croone.
* “Challenge the conventional wisdom that a one-floor library is more efficient.”
* Think of an expanded downtown library as a piece of developing Northfield as an Arts Town, said writer, radio host and writing instructor Paula Granquist. “Consider this as part of the cultural development of our community.”
* Expand this discussion of the library to look at the entire picture. We are a town that needs an arts presence, that is crying out for more public-school funding, that needs an expanded library, that needs to keep retail alive and well. How can those needs complement each other, rather than compete?

On behalf of the NDDC board, thanks to the three-dozen people who came to the NDDC Downtown Forum and who spoke so articulately on behalf of the library. Thanks, too, to Jan Feye-Stukas for leading a spirited discussion and for Lynne Young for helping to bring it off. The board and staff of the NDDC are committed to keeping this conversation moving forward. We need to hear from you!