No, it wasn’t Lee Lansing and Glenn Switzer, at least not yet. It was Chris Coleman of St. Paul, Stephanie Klinzing of Elk River, R. T. Rybak of Minneapolis, and Nancy Tyra-Lukens of Eden Prairie. It was called the “Mayors’ Summit on Affordable Housing’s Green Issues: Environmental and Economic Sustainability” and it was held at the Humphrey Insititute of Public Affairs at the University of Minnesota. 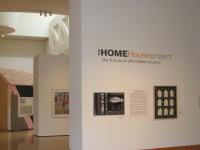 The Summit Program was part of a larger Initiative by the Weisman Art Museum at the University of Minnesota called “The HOME House Project: the Future of Affordable Housing“. I found it to be a way cool show and I urge you to check it out. It runs through April 30th.

The Weisman show features nearly 80 designs from a national competition for affordable single-family homes organized by the Southeastern Center for Contemporary Art in Winston-Salem, North Carolina. The focus was to design affordable housing that uses environmentally friendly materials and methods that are not only better for the planet but better for the people inhabiting the housing. The hope is to make affordable and sustainable design an important goal for communities all around the country.

There were several themes that emerged in the competition. They included:

Energy Innovations: new concepts in cooling, heating, ventilating and lighting as well as new approaches to siting and the use of recycled materials.

User Customized, Adaptable Housing: some tailoring of standard models for visual variety in neighborhoods as well as better service to the occupants and recognition of regional differences in climate.

Modular and Pre-Fab Techniques: decades, if not centuries, of effort at reducing costs through mass production.

Adaptive Reuse: (particularly of interest to me after my years of converting historic commercial buildings into comptemporary live/work spaces for artists) reuse of existing infrastructure, such as water and sewer, on underutilized sites and even reuse of abandoned buildings.

With almost 80 design teams getting creative around these themes, there are an incredibly wide variety of concepts that are displayed in the exhibit. Again, I urge you to check it out.

As for the mayors, they had a few ideas too. Chris Coleman started out by saying the to him, green housing means energy efficiency, building on transit corridors and careful selection of construction materials. Stephanie Klinzing said that as a rapidly growing fringe community, they were facing great challenges both in affordability and green development. R. T. Rybak said that his experience has led him to view land use as the critical issue in green development; land is the most scarce resource, at least measured in terms of cost, and that density is the most powerful tool in meeting that challenge. Nancy Tyra-Lukens suggested that when going green, you should begin by immediately harvesting the low-hanging fruit such as readily-available energy-saving products and then put your greatest efforts in adopting investments that have a longer-term pay-back.

Klinzing said you should state your community’s values on affordable housing and green development clearly, early and repeatedly. Tyra-Lukens suggested that it was an on-going education process. Coleman and Rybak added, and I’m quoting directly, “…and don’t wimp out”. Clearly a new generation of leaders is emerging.

Coleman closed by saying that, at least in his opinion, global warming is the greatest threat that our society currently faces and to meet this threat, some of the costs must be borne by society. He urged us to “consider it part of the infrastructure” necessary to build sustainable economies.