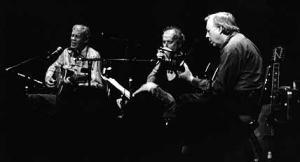 Some of you may be wondering where my obsession with Spider John Koerner began. Well, here’s my story…

So anyway, I was washing dishes one night, with a great view out the kitchen pass-through of the stage. On steps Dave Ray. Dave was our insurance guy. The Cafe always owned at least one beat up pick-up truck, for picking up supplies and taking the Collective members to Cedar Lake, and Dave actually insured these vehicles. I didn’t know that Dave was a guitar player but he was really good. Apparently he’d badly hurt his hand in a woodworking accident and this was his “come back” performance. There was a growing crowd, come to see how he was doing.

Then this guy that I called the Beat Poet got up on stage and started blowing the harp. He was quite good too. His name was Tony Glover and he sat around the Cafe all day, smoking cigarettes, drinking coffee and writing in a journal. He had these really distinctive boots that seemed from another era, that’s why I called him the Beat Poet. He seemed to be good friends with every musician in town and I figured maybe they’d played bongo for him back when he used to read his poetry in the late ’50s coffeehouses. If you heard Patti Smith name-check Tony on the recent 1st Avenue Bootlegs CD, you’d realized that this was probably the case.

Finally, the bartender from the Triangle Bar came through the back door and onto the stage with his guitar. The Triangle was out the back door and just down the block from the Riv. After shifts, the Collective members would either go out the back door down the block to the Triangle or out the front door and across Cedar Avenue to the 400. Some of the professional types that used to come to the West Bank to slum around and try to pick up hippie chicks found John to be kind of surly. However, he always treated the shopkeepers, the waitrons and the dishwashers of the neighborhood right. At any rate, this bartender, John Koerner, was not only a good guitar player, he could really sing.

In fact, all three of them were so good, and worked so well together, that I stopped washing dishes, walked out of the kitchen to the stage, and stood there and stared and listened. One of my fellow Collective members, Al Haug, came up to me and said, “You know who they are, Ross?” And I said, “Sure, it’s the bartender from the Triangle, our insurance guy and the Beat Poet”. Al looked at me, shook his head and said, “Well, I suppose you’re right, it’s Koerner, Ray and Glover…and someday you’ll understand”.

Well, I was a little slow but eventually I did understand that on that night, on that stage, on break from washing dishes, in the good old New Riverside Cafe, I saw Koerner, Ray and Glover. The group played a huge role in the Folk Revival of the late ’50s and early ’60s as one of the most talked about acts at the Newport Folk Festival and recording artists that influenced soon-to-be-famous musicians on both sides of the Atlantic. They helped rediscover over a hundred years of American Roots Music, not just the themes of the lyrics but the styles of the instrumentation, and make it live again for people.

Dave Ray has gone on to play at that Juke Joint in the sky. Tony Glover now writes biographies, having recently finished one about Chicago Blues harpist Little Walter. John Koerner, known as Spider John, is coming to Northfield on Thursday, February 23rd, from 8 to 10 pm at the Grand. Check him out, and maybe you too will have a story to tell.