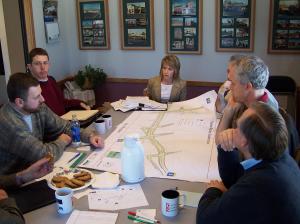 State Representative Ray Cox set up a meeting between Northfield leaders and MNDOT staff people. The topic was the traffic light at 3rd Street.

As you might be able to tell from the body language of Lee Lansing, Jim Pokorny and myself, we weren’t making easy progress in converting them to our viewpoint. The conversation went something like this:

They were quite pleasant to work with and really sincerely support our beliefs…but they want warrants. Perhaps most hopeful to me was the fact that they walked the area before the meeting and said that with our pedestrian bridge over the Cannon and entrance by the Ames Mill into Bridge Square, 3rd Street is clearly the main pedestrian route from west to east.

Now it’s up to the Council members and NDDC stakeholders to assemble our talking points into a formal document and cycle back to MNDOT.

Thanks to Ray for setting up the meeting and thanks to the MNDOT folks from driving up from southern Minnesota.