Downtown stakeholders were treated to a double bill this morning at the NDDC Monthly Forum. Paul Niemisto and Al Roder shared both entertainment and excitement in their presentations. 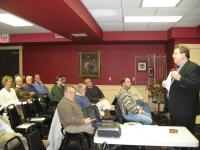 With a recording of vintage bands providing stirring background music and photos of downtown gathering places and international brass bands providing visual inspiration, Paul talked about his plans for the Vintage Band Festival (July 27th to 30th, leading into ArtSwirl and the Bridge Chamber Music Festival). He’s been busy, the Vintage Band Festival already has 15 bands lined up for a total of 40 concerts in locations throughout Northfield. Most of the events will be held outside and many will occur in downtown.

Paul told us that he was learning much from this experience, including about Cultural Tourism, the promotion of a community through arts and culture, supported by, and contributing to, a healthy economic infrastructure. At the NDDC, we believe that there is no better place to celebrate our community’s culture than our authentic downtown. 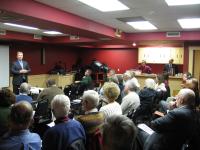 Al got off to a great start with the group by revealing that his first career was as a retailer (…hey Krin, he sold shoes…) and that he had extensive experience in economic development at the city, county and regional levels. He won further affection by saying the the focus of his Master’s work was on downtown revitalization.

Al was on roll. Hardcore NDDC stakeholders had a difficult time resisting giving him a standing ovation when he said that the streetscape design should not compete with retail sales. Al is determined to gain an economic return, measured by increased sales, on the city’s streetscape investment.

It seems that Al focuses not merely on the horizontal, like paved crosswalks and decorative sidewalks, but on the vertical, like building facades and directional signs. NDDC Community Advisor John Stull took heart from this perspective and asked about installing bike racks downtown. Go, John, go!

We were really excited by Al’s remarks. The NDDC is looking forward to working closely with him in helping our downtown to reach its fullest potential.