At the next City Council meeting (Monday, April 17th, 7 pm, in the Council Chambers at City Hall), the Council will vote on whether to repeal or reinstate Chapter 1306, special fire protection systems, of the State Building Code. 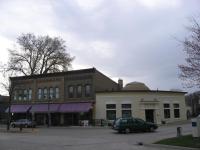 The NDDC distributed a statement on 1306, two weeks in the research and writing, to Council members and the City Administrator yesterday. It is included below.

However, as is sometimes the case at the NDDC, some of our stakeholders felt that we were too cautious in our statement. They cited David Hvistendahl’s powerful presentation at yesterday’s EDA meeting as being more to their liking.

I don’t have an electronic version of David’s letter. Rather than type it into this blog entry, I urge you to go have lunch at Froggy Bottoms today (pictured at left in the photograph), and thank Dave for taking a stand, ask him for more details about the economic and physical impact of 1306 on historic buildings and enjoy a tasty meal.

The NDDC has been hearing about 1306 from downtown building and business owners for 36 months. We have been working on the issue for 18 months. We believe that the requirement that historic buildings be retrofitted with sprinkler systems is burdensome to economic operations, destructive to historic structures and unnecessary for fire safety. We have offered alternative methods of achieving fire safety from American Institute of Architects Smart Code and the Preservation Alliance of Minnesota as better models for our historic downtown.

We have continued to work on this issue since the 3/20/06 Public Hearing. We believe that the results of our efforts are significant and should be of interest to the Council.

2) According to State Official Scott McClellan, the reasons a city would adopt 1306 are less than adequate local fire suppression capabilities including fire-fighting equipment, available staff, response time, geography, and water supply. Based on Northfields substantial strengths in all of these categories, there was no reason to adopt 1306.

3) According to the Minnesota Department of Labor and Industry, Construction Codes and Licensing Division, Building Codes and Standards Unit, there are very specific steps for adopting 1306. These steps are outlined in the Minnesota State Building Code and Adoption Guide. They include holding a public meeting, two public hearings, including the Regional Building Official in the process, and notifying that division within 15 days of adoption. This process was not followed by the City of Northfield in its adoption of 1306. Therefore, the NDDC believes that 1306 was improperly adopted and cannot legally be enforced.

If the City Council is determined to adopt 1306, in spite of what the NDDC believes to be compelling technical, economic and legal reasoning against such action, we believe that the Council must follow the state-mandated process for adoption.