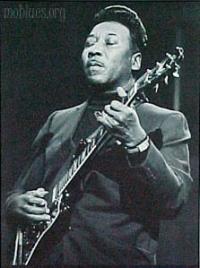 Today in 1913, McKinley Morganfield was born in a small village in Mississippi known as Jug’s Corner. The nearest town was called Rolling Fork, owing most of its recognition to its location on the railroad line.

His mother died when he was very young, and his grandmother raised him. It was this grandmother that gave him his nickname of Muddy Waters. They moved north to the Stovall Plantation outside of Clarksdale before Muddy was three years old. He lived there for the next 27 years. Muddy worked on the plantation, rising to the position of tractor driver, until a disagreement over wages led him to take the train north to Chicago.

Sharecroppers earned barely subsistence wages and Muddy had always supplemented his income by playing music at house parties. He had learned his lessons from the greatest masters of the Delta Blues and learned them well. By the time he left Mississippi, Muddy was widely respected as one of the finest musicians in an area that was rich with talent.

When Muddy arrived in Chicago, he focused on trying to make it as a professional musician. Playing in the loud and rough bar scenes of the southside of Chicago, Muddy switched from the acoustic to the electric guitar. His leadership skills enabled him to organize and develop a sometimes changing but always talented group of musicians and, through electrifying the Delta Blues, move American music toward one of our most successful economic exports, Rock and Roll.

How is this relevant to downtown? Well, when Muddy and his fellow blues musicians from down south helped develop a music scene on the southside of Chicago, they not only helped create a community for this growing industrial workforce, they also helped stimulate locally controlled economic development. Artists helped do it then, they helped do it before and they’ll help do it again.

Muddy died on April 30, 1983 in Chicago, having left us a great musical legacy. Happy Birthday Muddy.