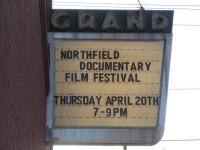 This month’s entertainment will be films…documentary films.

The Northfield Documentary Film Festival will take place on Thursday, April 20, from 7 to 9 p.m. at the Grand Event Center, 316 Washington St., in downtown Northfield.

The event, which will feature several short films about Northfield’s past, is part of the Third Thursday Presentation Series sponsored by the Northfield Downtown Development Corporation (NDDC) and the Grand Event Center.

There will be a $5 admittance fee and two intermissions at the Third Thursday event to allow for mingling and socializing and, no doubt, cultured conversation. Hors d’oeurves will be served, and The Grand will provide a cash bar.

Leading off the evening will be “The Jesse James Music Festival”, a 1978 film by Martin Schieckel, a 1977 Carleton College graduate. Schieckel currently lives in Stillwater and will be attending the screening of his film. Come see many familiar Northfielders, as they looked back in 1978. “You do the math, let your imagination paint the picture”, says NDDC Executive Director Ross Currier

Next will be “The Cannon River,” produced by Dennis Wilcox and Paul Krause for the Northfield Community Video Project. This documentary was originally released in 2000 and was recently revised for the Northfield Sesquicentennial in 2005. “It artfully and succinctly provides a look at the historical, cultural, environmental, aesthetic and recreational aspects of the river,” says NDDC Board President Dan Bergeson.

The third and final film will be “Letters from America: The Life and Times of O.E. Rolvaag,” which premiered in Northfield in 1989. The Rolvaag film was written and directed by Tim Schwab and Christina Craton, two independent filmmakers from South Dakota. There are a several clips from Rolvaag family interviews, including appearances by Rolvaag’s son Karl, a former governor of Minnesota.