It’s another big weekend in downtown Northfield. As we say at the NDDC, “There’s always something happening downtown”.

In fact, there’s more going on than will fit in a blog entry, so check out the Northfield Entertainment Guide (PDF) or the Northfield News’ Diversions (web section) or pick up either one in print form at many fine establishments throughout downtown. Here are just a few highlights…

Jeff Ray at Hogan Brothers, 7 pm. The Des Moines Register said Ray has “a quality that could only come by blending the birthplaces of Bob Dylan and the blues”. His website says that he walks the (thin) line between blues and folk, “one minute he’ll pick up a metal-body guitar and wow the audience with a slide-guitar ballad, the next minute he’ll blast off into a foot-stomping one-man band train ride”.

Cabaret at the Northfield Arts Guild Theater, 7:30 pm (Saturday and next weekend too). The Guild continues its almost 50 year tradition of bringing a wide variety of arts, recreation and culture to the community with its (you can be sure) unique version of this highly entertaining and thought provoking show. Come see your family physician with his shirt off for once. If only you could put that cold end of the stethoscope against his chest.

Earth Jam, Bridge Square, 9 am to 7 pm. Join your friends and neighbors for a town clean-up/beautification, learn new things from environmentalists and farmers, and score great goodies from Just Food and The Mercantile. From 2 to 7 pm artists from around the world will provide entertainment. Celebrate the site on the river that caught John North’s eye 151 years ago. 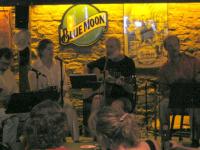 Blue Moon String Band, Contented Cow, 8 to 10 pm. Okay, I play the bass in this band, but it’s fiddle player and singer Bruce Milan’s Farewell Performance before moving to Canada. Bruce has sold vegetables at the Farmers’ Market, repaired bikes at Mike’s Bikes and installed decorative ironwork around downtown. He’ll be missed by more than just his band mates. So come on down to the Cow to hear him play and wish him luck, way “Up North”.