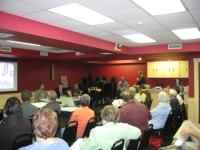 The three dozen people that gathered in the lower level of the Archer House to discuss outside dining seemed to be in agreement: although there are some potential challenges arising from sidewalk dining, the potential benefits seem well worth giving the concept a test in Northfield.

Froggy Bottoms owner Dave Hvistendahl started it off by suggesting that it would be most efficient and effective if outside dining were just part of the licensing process. He cited examples from around Minnesota where the people have demonstrated that outside dining adds to the economic vitality of their communities.

Chief of Police Gary Smith then stated that although some people may be concerned that outside dining adds to crime, he believes that by bringing more eyes to the street, outside dining actually discourages crime. He said that he thinks the big challenge will be balancing the vitality of outside dining with the desire of downtown residents for a peaceful night of sleep.

Chapati and Contented Cow owner Norman Butler worked to summarize the issue by saying that he thinks the challenge is to successfully share sidewalks between pedestrians and diners. He believes that if we get all of the concerns on the table, we can devise a system that addresses those concerns.

Audience members asked a number of questions, including if there was an adequate police presence to address additional outside dining, for a clarification on the open container law, whose responsibility it is for drunks that go for a stroll, and what might sidewalk seating’s impact be on accessibility.

Panel and audience members offered some ideas, including defining a 42 inch clear zone for the sidewalk in the ordinance, specifying closing times for outside seating, temporary use of parking spaces for seating during special events, and creating a green buffer of potted plants around the outside seating.

Downtown business owner and EDA member Tracy Davis seemed to sum up the sense of the group when she said, “It doesn’t sound like there are any concerns that can’t be addressed, shouldn’t we just give it a try?”