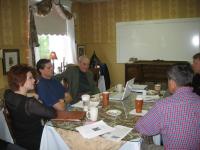 Gordon Van Wylen, former president of Hope College and amateur downtown revitalization expert, visited Northfield to share some of the wisdom gained from 20 years of working for the vitality of downtown Holland, Michigan with members of the EDA, the NDDC, and the Planning Commission in an informal gathering arranged by Rick Estenson early Friday morning.

Gordon stressed that it took much time and energy and that the work was never done but his photographs demonstrated the rewards of these efforts. He suggested that it took a clear shared vision, energized community leadership, and a willingess to trade ideas in an open forum. He emphasized that the ideas, expertise and skills exist within the community and do not need to be brought in from the outside.

He also stressed the importance, even when focusing on the big picture, of always remembering the connections, particularly the bicycle and pedestrian connections. In an ironic twist that amused several members of the audience, Gordon repeatedly pointed out the contribution to downtown vitality that was made by outside dining, including allowing privately owned seating to occupy public spaces.

Gordon left behind several handouts describing the history of their efforts and plans. You can count on me and Tracy Davis to summarize this information in future blog entries.