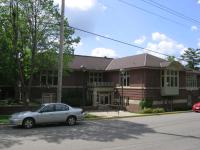 Thursday night and Friday afternoon, I heard rumors, from what I consider to be reliable sources, that the Library Board doesn’t believe that it is feasible to expand the library in its current downtown location.

Let’s discuss rumors. At the NDDC, we talk about the 4 “R”s: Recruitment, Retention, Reassurance, and Rumors. You’ve probably all heard about the first two “R”s, Recruitment and Retention. At the NDDC, we think that an important part of Retention is Reassurance. We also think that an important part of of Retention is hearing about challenges and concerns early; that’s why we don’t ignore Rumors. And let me share with you “Ross’ Rule on Rumors”. If I hear the same rumor from two totally unrelated parties or three somewhat related parties, I take that rumor seriously.

So, when I heard a rumor Thursday night and then again on Friday afternoon that the library board’s response to the consultant’s report was that it was just going to be too hard to expand downtown, I suggested to my board of directors and community advisors that they start asking around, trying to follow up on these rumors, preferably in the next day or so.

If you’re interested in this topic, listen to the Locally Grown podcast. You may be surprised to learn that the consultant’s final report will be presented to the city council on Monday night.