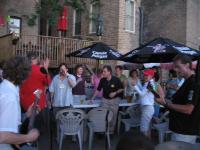 (…except during the breaks.)

Jellystone Yogi (Peter Diggins on guitar, Joel Cooper on bass and George Marich on drums) was laying down the grooves and about twenty spanish teachers at a program at Carleton College were putting up the moves.

The 40-something musicians and dancers were creating such energy that they attracted the attention of some Northfield High School students, who watched in amazement from the pedestrian bridge.

There’s more excitement tonight, when Peter and Joel return to the Cow with the Prairie Creek Group, one of the most buzzed about groups on the local scene.

Come on down(town) and check them out.