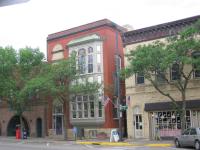 In today’s South section of the Star Tribune, there’s an article about the growing realization that the arts have a powerful positive impact on the economy. The article references University of Minnesota Professor Ann Markusen, highlights the decades of contributions made by the Northfield Arts Guild, recognizes the emerging ArtOrg and mentions the cultural impact of the two colleges.

Of course, the NDDC has been working to take advantage of this economic development opportunity for some time. We had Ann Markusen as our Forum speaker (cohosted with the NAG as part of ArtSwirl) back in Summer of 2004. We raised community consciousness about the Creative Class in March of 2005. I blogged about other regions’ recognition of the economic power of the Creative Economy in August of 2005. And the NDDC has been working long and hard to bring some more of this economic stimulation to Northfield through the Building for Creative Professionals.

Nevertheless, we thank the Strib for recognizing the economic power of the arts and the vital arts scene in Northfield. When the momentum begins to build, progress becomes more apparent.

And speaking of ArtSwirl, the 2006 Program Guide is available in PDF: