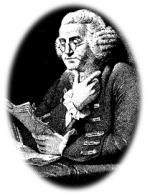 In a recent blog entry, I quoted Ben Franklin on libraries. Subsequently, I’ve been asked by several people for more information. I’m not an expert on the subject (most of my knowledge was gleaned in the search for a quote from Franklin) but I’m happy to share what little I know in hopes that someone else might pick up the research trail and the blogging pen.

Unlike Europe, where libraries were privately created and controlled by the wealthy few, in the United States, from the very beginning, public libraries were a top priority. For the first hundred years, there were many innovative experiments in bringing library services to a broader public.

Perhaps the most famous of the early American libraries is The Library Company of Philadelphia which was founded in 1731 by Benjamin Franklin and a group of his friends as a means to settle arguments. Technically not a free public library, it was a subscription library which allowed individuals to buy “shares”. The money raised from the sale of shares went into buying more books. A member or shareholder then had rights to use the library. The Library Company, which may have been a public library in the sense that the members could actually borrow books, is still in existence today as a nonprofit, independent research library.

Books became increasingly available as the 18th century progressed. Improvements in printing methods lowered their cost, making them affordable to more people. Increased interest in commerce, science, and art spurred a demand for more information–a demand that was often best satisfied through reading. Colonists began to form social libraries in which individuals contributed money to purchase books. However, such societies generally only lent their books to those who had donated money.

Libraries continued to develop after the Revolutionary War. Women created their own collections in order to share books among farms and plantations. Between 1815 and 1850, library societies increasingly focused on specific groups and their interests such as merchants, mechanics or seamen.

During the second half of the 19th century the “free” library movement–that is, open to the public at no charge–began to spread. Social activists believed libraries could teach millions of immigrants the skills to succeed and the knowledge to improve their station in society. In addition, reformers thought education would make better citizens.

Making libraries a key for self-improvement had its challenges. Lack of money, insufficient book collections, and limited memberships prevented libraries from expanding as fast as the demand. America’s rapidly growing communities demanded many services, such as better transportation, sanitation, and schools. Buying books and building libraries were, for many citizens, a lower priority.