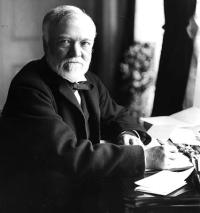 Although there were very few public libraries developed in the first two hundred years of the United States’ existence, public library supporters held on to the vision of books being available for all people. After all, this was the Land of Opportunity, where anyone with a little innovation and determination could improve themself and achieve the American Dream.

Communities gradually gained the right to tax, which held the potential to supply funds, but there were also many demands on those funds. It was at this point that the generosity of Andrew Carnegie accelerated the development of American libraries. His donations provided communities across the country with millions of dollars to build new libraries.

Carnegie was a classic rags to riches story and living proof of the American Meritocracy. He had educated himself through the generous lending of books by a well-to-do man in his community. Adding the drive toward self-improvement to his inclination to work hard, Carnegie rose to the very top of American Society.

Carnegie knew that immigrants like himself needed access to a cultural education about America. He believed that this would most widely available through a strong system of public libraries.

Many Americans were first exposed to information and imagination by reading books they obtained from a Carnegie library. Between 1886 and 1919, Carnegie’s donations of more than $40 million paid for 1,679 new library buildings in communities across America. In fact, many towns in the middle and far west have public libraries largely through Carnegie’s philanthropy.