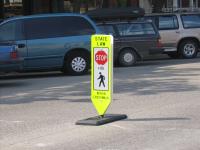 A couple of weeks ago, I noticed that those bright yellow pedestrian crossing signs appeared to come and go with seeming randomness. I thought that during this time of construction traffic detours through the heart of our community, it might be nice to see them more regularly in downtown.

I sent off an e-mail to Chief Gary Smith and a day later the signs appeared in greater numbers and have been moving around downtown instead of in and out. I think that it has helped with pedestrian safety, especially during the “rush hours”. I sent another e-mail to Gary, thanking him heartily.

Today I got a call from Officer Kris Wilson. He said that not only is setting up and taking down the signs every day rather labor intensive, but that the department’s schedule is not ideal for the needs of the “rush hours”. He wondered if the NDDC could get downtown business owners to “adopt a sign”. I said, “no problem, we’d love to help out”.

We need six volunteers. I’ve got three lined up. The signs weigh about 20 pounds and go out in the morning and in at night. Anyone else who is interested, just give me a call or send me an e-mail. We’ll be holding an “orientation” some time next week.