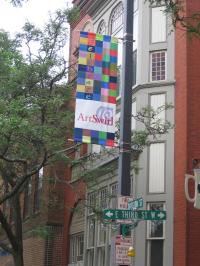 The most recent addition to the NDDC’s Banner Program went up this morning.

Last year, the NDDC added a Historic Northfield banner, a Defeat of Jesse James Days banner, and a St. Olaf College banner to the existing Carleton College and Holiday Greeting banners. The new banners were financed by the generous contributions of local businesses.

The newest banner promotes ArtSwirl, the annual celebration of the arts presented by long-time partners, the NDDC and the Northfield Arts Guild, and sponsored by the First National Bank, the Northfield News, Community National Bank and The Rare Pair.

By the way, this year’s ArtSwirl begins with a Vintage Band Concert on Thursday, July 27th, at 7 pm in Bridge Square and runs through Sunday August 13th with tours of local studios, including Eureka Pots.

The NDDC wishes to extend its warmest thanks to City of Northfield Operations Manager Joel Walinski and his team for their on-going support of the NDDC Banner Program.