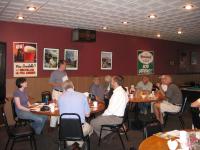 Proposed Outside Dining Ordinances: Brian O’Connell, Director of Community Development for the City of Northfield was the guest speaker. He said that the City is very supportive of sidewalk vitality resulting from this activity. The concern is to preserve access on public property. The permitting process is intended to preserve access. If these ordinances are passed, existing businesses wiould now have to get permission from the City.

Brian thought the process should be easy. Busineses would indicate where the actitivty will occur, what activity is proposed and how long it will occur. Staff makes the call, in a matter of hours, and there would be an appeal process to the City Council.

There were many questions about what might prevent permission being granted. Questions were asked about the minimum space necessary for passage on the sidewalk and whether it should be mandated or recommended. There were some concerns about addressing tables and chairs through the permitting process but impacting long-standing book shelves. A suggestion was made that perhaps the requirement for the permit kicks in after an 18 by 36 inch space on the sidewalk is occupied by a business. It was noted that this ordinance would not impact the sandwich board signs.

These ordinances are not on any official body’s agenda right now. We are still in the comment gathering phase. The City has asked the NDDC to bring organized responses on these proposed ordinances.

Many stakeholders are supportive of participating in the program. Some stakeholders voiced the concern about losing a small but appreciated visible police presence in downtown if the program was taken over by the NDDC. The Northfield Police responded that they would like to maintain or increase the presence in downtown but in other roles and tasks. One stakeholder expressed the opinion that the Street Department could drop off the signs on their way out in the morning and back in the afternoon.

NDDC Vice President Joe Grundhoefer said that our organization is all about partnerships and that we’d take the proposed program to the full Board for approval. He also suggested that the Board may formally request that the traffic speed for downtown be reduced.

Crime Reduction Strategic Initiatives: Northfield Police Chief Gary Smith was the guest speaker. The primary crime issues downtown are property, parking and “turf” issues. Property issues can range from backpacks being taken to vandalism against buildings. Parking issues result from the amount of traffic downtown as well as the receiving of deliveries in the middle of the street. It was noted that running stop signs is not limited to vehicles as there are issues with bicyclists too. “Turf” issues result from adjoining property owners having disagreements over the use of property, both private and public.

There appears to have been a modest increase in the issues this summer.

The Police recently had Sentenced to Serve paint over the grafitti. They are working with MNDOT to try to avoid creating “canvases” for the spray paint. Many of the recent break-ins could have been prevented by better securing the entrances to buildings. The Police are happy to make housecalls to businesses to advise them on increases security for their properties. Interested parties can contact Chief Smith at 645-4477.

There was much discussion about skateboards and bicycles on the sidewalks. Some of the challenge to addressing these issues in the prioritization of judges. Some of the challenge is the wording of the ordinances. Everyone seemed to agree that all of these topics are not merely police issues but community issues. The NDDC committed to doing an upcoming Monthly Forum on these issues to increase community awareness and involvement.

The next Block Head Gathering will be in late October or early November. Downtown Stakeholders are encouraged to suggest topics for the next Gathering.