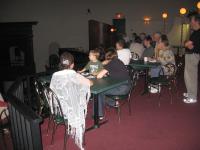 That was the subtitle of the movie “Downside Up” and the most powerful, and unexpected, message, at least for me, in the film.

About three dozen folks turned out to watch the film and about two-thirds of them hung around until the very end, almost three hours later, of the discussion of the film, ArtsPlan06 and arts and economic development in our community, for the latest NDDC Third Thursday Series presentation, at the Grand, in downtown Northfield.

Although we tried hard to make clear that we understood that Northfield is not North Adams, saying in the introduction that the potential similarity could be that people in both communities united behind a shared vision and, in fact, REenvisioned what their towns could be, we were continually reminded that we don’t have 200,000 square feet of long-vacant historic factory buildings in Northfield.

Yeah, we in Northfield lack the powerful unifying force of total economic desperation but, hey, we’re so smart that maybe we can move ahead of the curve and take advantage of emerging opportunities.

The discussion included creating an amenity package that would attract the creative class, and the jobs that they generate, to Northfield, determining the most powerful point of economic intervention through strategic investment, achieving greater cultural and economic leverage from the Cannon River, creating new and on-going music festivals that would be a regional draw, fostering the start-up of for-profit galleries in Northfield, investing in the internet instead of highways, speculating on theories of the perfect equilibrium between supply and demand for additional restaurants, comparing demographics of the creative class and the bus tourists, conceptualizing the geography of a cultural zone in downtown Northfield, and visualizing a Culture Train from the Twin Cities to Northfield.

I took five pages of notes, the ideas above are just a scratch on the surface.

The next objective of ArtPlan is to suggest 5 to 9 ideas, test them for community support, and then recommend a few “Strategies” with “Action Steps” and/or “Initial Investments” to the City Council. If you’re interested in shaping the outcome, jump on into the process, and the sooner, the better.

…back to the film’s message, think not only of how potential visitors, residents or employers perceive Northfield but of how children growing up here perceive it…