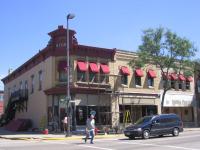 There are some people who think that anything south of 5th Street is Antartica (or Dundas). That’s one of the reasons that the NDDC tried, unsuccessfully, to get stop signs installed at 7th Street. The building and business owners thought that increasing the pedestrian friendliness from 5th Street to 8th Street (or Woodley) would add vitality to south Division.

For many people however, it’s an area with great potential. In recent years a number of businesses south of 5th have made substantial investments in their buildings. Now NDDC Board Member Joe Grundhoefer and his wife Jodi are putting some icing on the cake.

J. Grundy’s Rueb-N-Stein is getting a fresh coat of paint. The 1868 Scofield Building (constructed by Dr. John Scofield) features the year “1878” on its pediment that was added after a fire. The Rueb’s building occupies the former site of the Jenkins Tavern (1856), the city’s first hotel and gathering place.

Swing by to check out the painters’ progress, stop in for some food and beverages, and say “Hey” to Joe and Jodi.