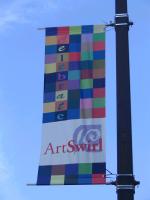 This photograph was sent to me by Ally Beyer from the Rare Pair. She was also the photographer for the already famous shot of the four restauranteurs that illustrated our Taste of Northfield poster. This one is of the latest entry in the NDDC Banner Program, recognizing that we’re in the middle of Northfield’s Third Annual Artswirl.

I put on the red, white and blue tie-dyed t-shirt that my Mom gave me (I use it as my racing shirt) for the Mayor’s Bike Ride, acknowledging the promising ARTrail being created between Dundas and Northfield, this morning. It was raining pretty hard at 9 am, so I went grocery shopping instead. I’m sure that both Lee Lansing and Glen Switzer will call me a wimp the next time they see me. It’s great that I can provide the Mayors with something they can vigorously agree on now and then.

Moving back from politics to art, the work in the NAG‘s Annual Members Show, which opened last night, was truly impressive. (I swung in for a quick viewing before my Blue Moon gig at the Cow.) I missed the Japanese Garden Tour (I was shopping at the Farmers’ Market, scoring some great tomatoes, during the Tour) but Doug Bratland covers both the Tour and the Opening on Northfield.org, and provides some great photos too.

Hopefully, the much-needed rain will end in time for the Cannon River Paddle Classic, 12 pm in Ames Park just south of Malt-O-Meal‘s historic mill. The canoe “race” is a new addition to ArtSwirl (part of the R in ARC, Arts, Recreation and Culture) and is a benefit for the Cannon River Watershed Partnership.

Ideally, the rain will take a break until after the NAG’s Theater in the Park, the once-a-year live performances in Central Park. The show is at 7 pm both tonight and tomorrow and continues next weekend.

…oh, did I mention the Studio Tours next weekend?