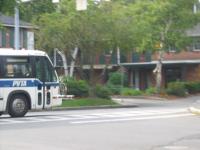 Last week I traveled to Amherst, Massachusetts to deliver my oldest daughter to college. Amherst, with three colleges in the town and two more schools less than 10 miles away, has a very vital downtown.

There were several ideas that I saw that I will eventually share with you but I want to start with one that I think supports the concept of bike friendliness.

There is a bus service that brings people from campus to campus and from the campuses to the community. On the front of these buses are fold-down bike racks which hold two bikes each. I watched as someone flipped down a rack, hooked their bike in place and then boarded the bus, all in about a minute.

If we installed these racks to the Northfield Transit buses, someone could ride the transit from their home in the southeast of Northfield, to their job in our authentic downtown, and then have their bike available for errands during lunch. I think that it would make a substantial contribution to the bike friendliness of our community.

(Yeah, I know that this isn’t the greatest picture. It’s a little tricky to catch a moving object…)