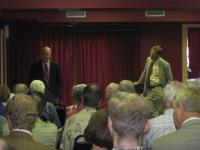 David Anderson, President of St. Olaf, and Rob Oden, President of Carleton, agreed on many things this morning. One point in particular was emphasized over and over, the importance of a vital downtown.

David started with a review of the many ways that St. Olaf participates in the life of Northfield. Of particular interest was the 10,000 hours of volunteer work that the students gave to the community last year. He also stressed the potential power of his long friendship with Rob, offering “If there was ever an opportunity to do good together, this is it”.

Rob quickly moved the discussion downtown, saying “A great downtown is not important, it’s vital”. He then advised, “Ignore a vital downtown at your peril and pay attention to a vital downtown to your great benefit”.

When a member of the audience asked during the audience question portion of the presention what could the community do for the colleges, he continued on this theme by answering “The number one thing the community could do for the college is to keep the downtown vital. If the downtown was to lose its vitality, applications to the colleges could go down 20%”. David added, “Downtown plays a very important role in the parents’ decision-making process about school choice”.

Much to the delight of the audience, both David and Rob welcomed the opportunity for additional collaborations between the colleges and community. We at the NDDC just want to thank them for coming on down(town).