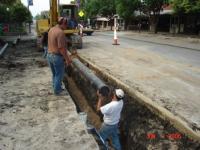 The NDDC’s work to collaborate with the Chamber of Commerce on economic development initiatives continued with the third quarterly meeting between the organizations’ boards of directors.

The effort began a year or so ago with informal lunches between the board presidents and executive directors. The decision to pursue a more formal and systematic approach to collaboration came earlier this year.

The Chamber started by outlining their priorities for the year. They listed economic development, particularly annexing and rezoning land to create a new business park near Highways 35 and 19, Transportation, particularly a traffic study of Highway 19, communicating with legislators and membership, as their top priorities for ’07.

The NDDC supported the creation of a new business park (although we also wanted potential sites to be evaluated for comparative cost of infrastructure and believe that intensified use of existing commercial and industrial properties within the city should be part of the effort), supported the effort to improve Highway 19 (although we also thought that Highway 19 should be considered in the context of other major east-west routes in the area and believe that internal linkages should be part of the transportation effort for both increased safety and vitality), and we have tended to put more emphasis on working with local officials as opposed to communicating with state legislators (perhaps we are already learning something from each other).

The groups agreed to send a joint letter on Highway 19 and hold a joint meeting on the Mill Towns Trail in January. If our economic development stakeholders have any other issues that should be tackled in 2007, please share them with our organizations. There’s still time to get these topics on our agenda.