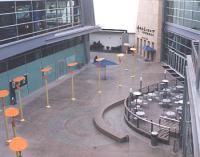 In the January 8th New Yorker, there is an article about the changing economics of the movie industry. It’s called “Big Pictures” and was written by David Denby.

To summarize one of the several topics covered in the article, the conventional movie production model is broken. Under the current model, a movie can gross $100 million and still lose money. The few movies that are profitable now are often those made by independent film makers for a fraction of the big studio cost.

Near the end of the article, the author suggests that the conventional model for movie theaters is suffering from the same changing economics. Many of the massive multi-plexes are losing money.

The trend of the future may be “user-friendly” theaters. These theaters have much smaller houses, with fewer but plusher chairs, and all of the seats are reserved. The new paradigm theaters have lobbies that may contain a restaurant, bar and book-and-gift shop. One that he describes even has outside dining. According to the article, “the rest rooms are spotless and the concession stand serves delicious coffee”.

Apparently this new style theaters are intended to bring the older audience back. These former film-goers value movies as an art form and believe that movie-going is an experience that should be preserved and, apparently, enhanced.

Perhaps it’s the “traditional” model of movie theater, where the film is a craft not a commodity and part of the experience is the socializing before and after the show. Let’s hope that there’s a “user-friendly” theater in Northfield’s future. It sounds like a downtown movie house to me.