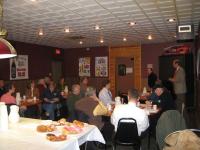 Downtown building owners gathered to dine on pink-frosted doughnuts, chat with their peers and discuss the NDDC’s proposed Downtown Managment District. About two dozen building owners met at the Rueb-N-Stein on Valentine’s Day to hear about a concept for strengthening the Downtown District.

Known in most places as a Business Improvement District and in Minnesota as a Special Services District, we at the NDDC are calling it a Downtown Management District. It is a legal entity available in Minnesota. According to the Minnesota statutes, it is “a defined area within the city where special services are rendered and the costs of the special services are paid from the revenues collected from service charges imposed within the area”. It creates a vehicle through which building owners can finance enhanced services for the district.

We believe that it will give downtown building owners a united voice in meeting the challenges, the power of teamwork in taking advantage of the opportunities and, perhaps most important, more control over the management and promotion of and the activities and investments in Northfield’s downtown district.

Minnesota law requires that 25% of an area’s building owners sign a petition of support for the creation of such a district. The NDDC has set a 60% requirement for the downtown district in Northfield. Once the petitions are signed they are presented to the City Council and a Public Hearing is held.

The NDDC will be following up with one-on-one meetings with building owners over the next six weeks to further discuss the DMD. Our hope is to present the petitions to the Council in April of this year.